WHEN ARCHITECTURE RIVALS THE ART

From Rio de Janeiro to Seoul and everywhere in between, you can find stunning museums that house some of the finest art in the world. While it’s very easy to lose oneself in the Monets and Van Goghs, it’s worth remembering that the buildings themselves are worth a second glance.

The architecture of some of the museums is so remarkable that it can rival or even overshadow the collections of art they house, captivating onlookers from the outside and drawing them in to explore the art displayed. Designing a museum has become a badge of honour, attracting star architects like Zaha Hadid or Frank Gehry. To highlight the beauty of some of those buildings we’ve compiled 30 museums of exceptional architecture and design that will blow your mind. This is part one of a three-part series. 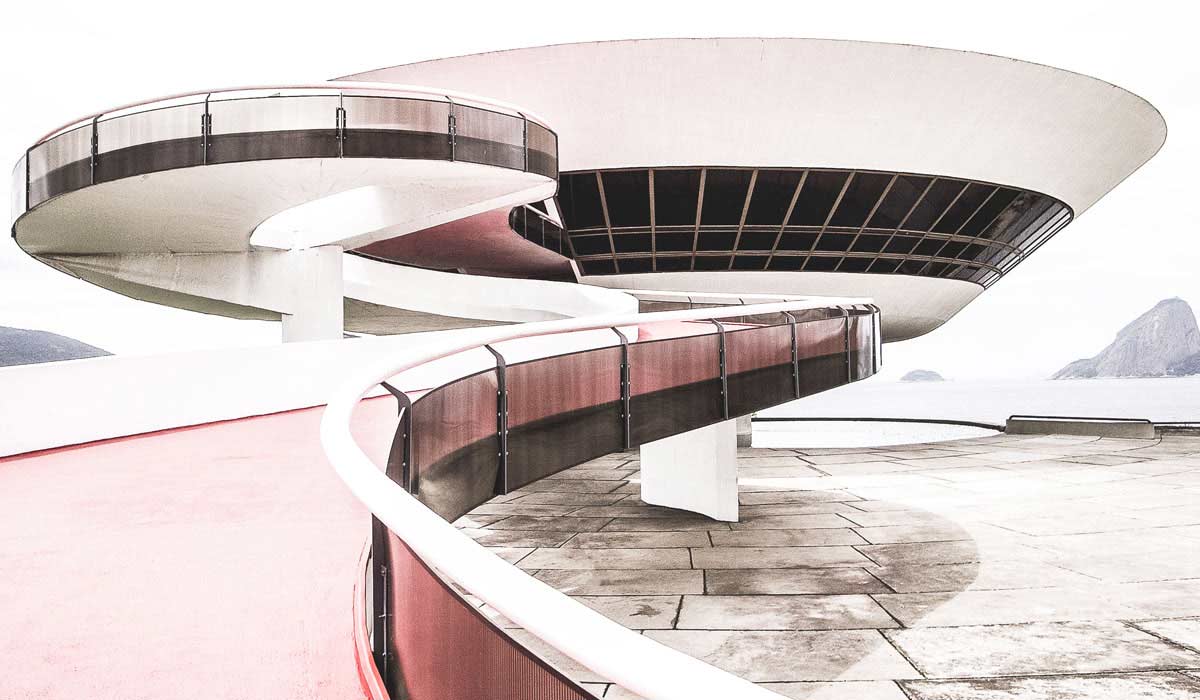 Build in 1996, The Niterói Contemporary Art Museum, also known as the MAC, is situated on a cliffside above Guanabara Bay in the city of Niterói, just outside of Rio de Janeiro. The Museum was designed by the renowned Brazilian architect Oscar Niemeyer with the assistance of structural engineer Bruno Contarini. Often likened to a UFO or a flying saucer by the locals the architect wanted the structure to look like a flower growing from concrete. The 16 meter high museum with its cupola that spans over 50 meters offers panoramic views of Rio De Janeiro and embodies Niemeyer’s simple and minimalistic aesthetics. 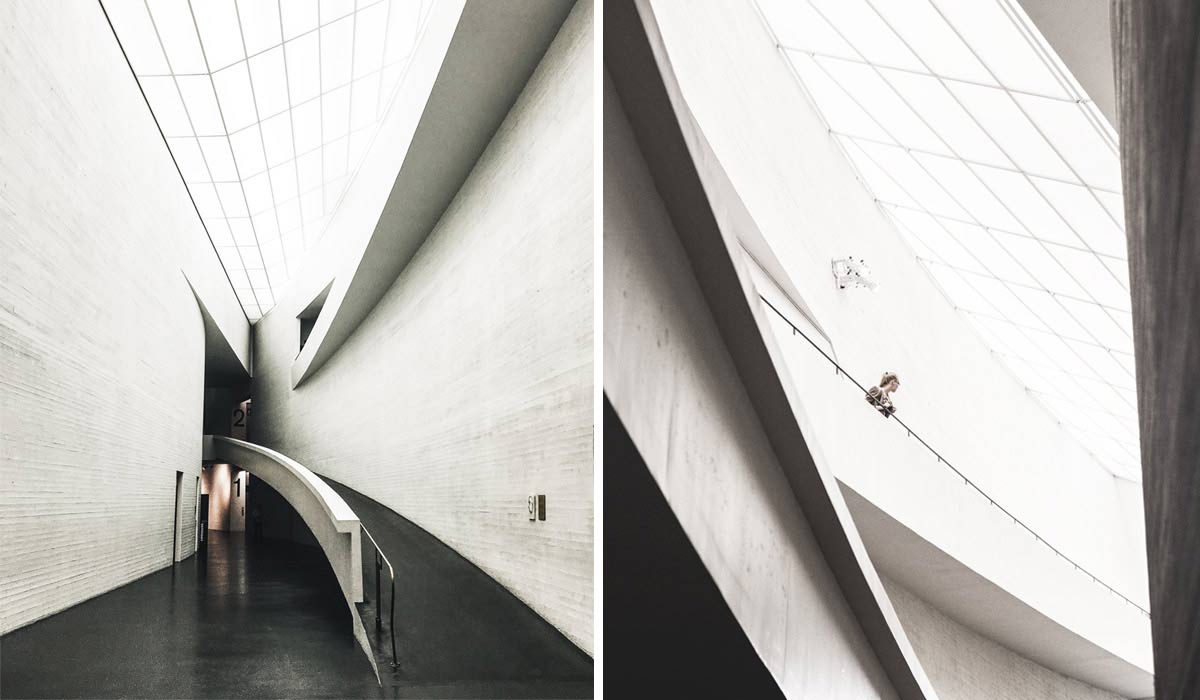 Kiasma opened its doors in 1998 and is one of the leading museums of contemporary art in the Nordic region. The museum is located in the heart of Helsinki and is one of the major architectural landmarks of the city. Kiasma, which name derived from the word chiasm, was designed by renowned American architect Steven Holl. The museum is designed with an open-flow concept which allows museum visitors to easily stroll from exhibit to exhibit as the mood strikes. 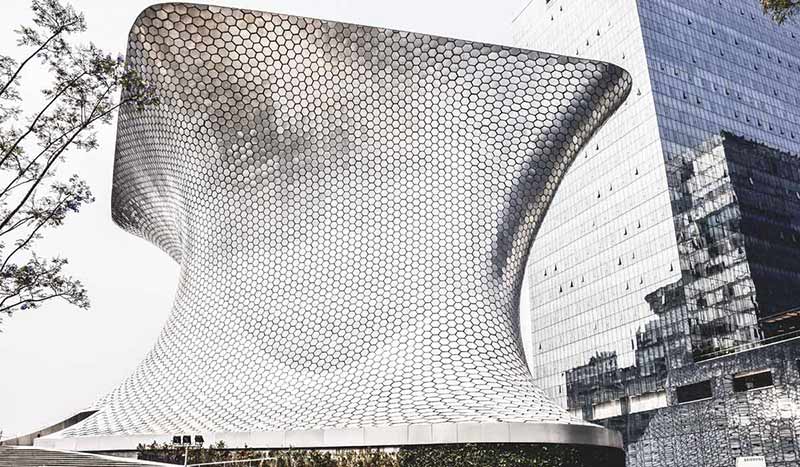 The Museo Soumaya in Mexico City was designed by Mexican architect Fernando Romero and opened to the public in 2011. The museum is named after Soumaya Domit, who died in 1999, and was the wife of Mexican business magnate and investor Carlos Slim. The structure is tiled with 16,000 aluminium hexagons which gives its peculiar geometric yet organic look. Although the museum is predominantly recognised for its stunning architecture, the art collections displayed are just as spectacular. The 70 million USD expensive building houses over 66,000 works from many different centuries and is one of Mexico’s most visited museums. 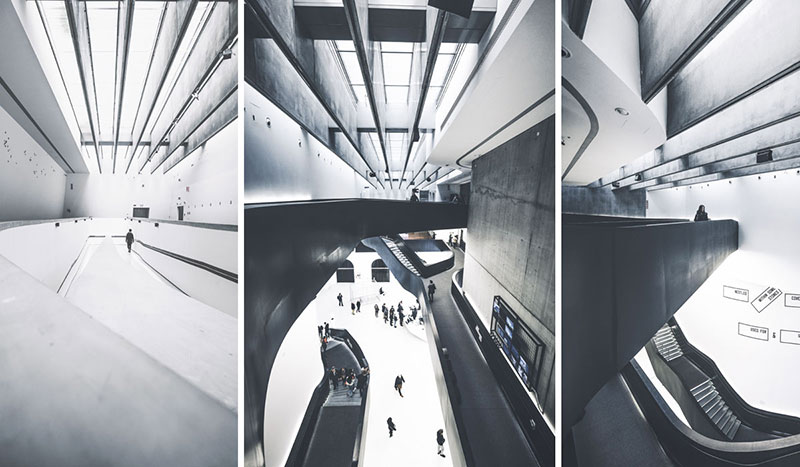 The MAXXI (short for Museo Nazionale delle Arti del XXI secolo), the National Museum of 21st Century Arts, is the first Italian national institution devoted to contemporary creativity. The museum is situated in the Flaminio neighbourhood of Rome, Italy. The museum was designed by the British-Iraqi star architect Zaha Hadid and was awarded with the Stirling Prize for architecture by the Royal Institute of British Architects. It was designed as a multidisciplinary space for cultural experiments and innovation as well as research and study. The MAXXI houses to museums: the MAXXI Architettura which is the first national museum of architecture and the MAXXI Arte which focuses on contemporary art. 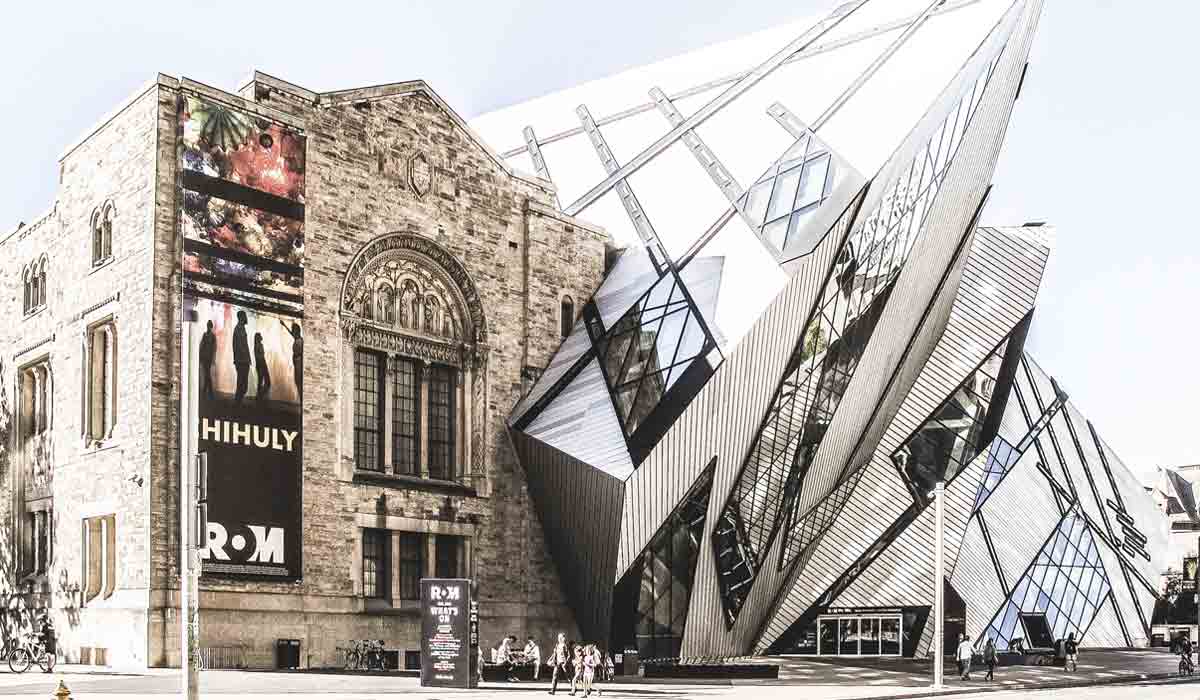 The Royal Ontario Museum (ROM) is situated in the city centre of Toronto, Ontario and is one of the largest museums in North America, the largest in Canada and attracts more than a million visitors a year. The museum was first opened in 1914 and showcases art, culture, and nature from around the globe and across the ages. In 2007 the museum was extended by the Michael Lee-Chin “Crystal”. The extension’s name is derived from the building’s five intersecting metal-clad volumes, which are reminiscent of crystals. The extension designed by Daniel Libeskind provides 100,000 square feet of new exhibition space and is definitely one of the highlights of the museum. 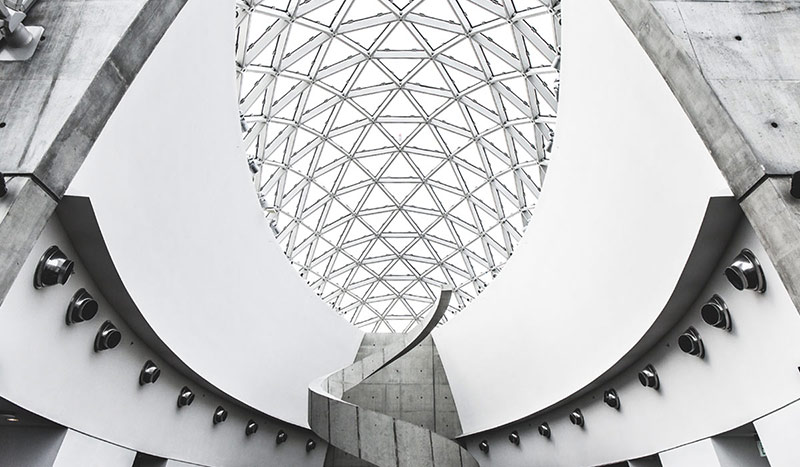 The Salvador Dalí Museum is located on a scenic waterfront site in downtown St. Petersburg, Florida and provides 68,000 square feet for Dalí’s artwork and admirers. The museum features hundreds of oil paintings, sketches, sculptures and other works making the exhibit the largest collection of Dalí’s works outside Europe. The museum was designed by Yann Waymouth who created a structure that not only represents the artist, but can also protect his works from the elements. Highlight of the structure is the skylight and the large glass entryway which is 75 feet tall and is often referred to as the “Enigma”. The remaining walls are composed of 18-inch thick concrete. 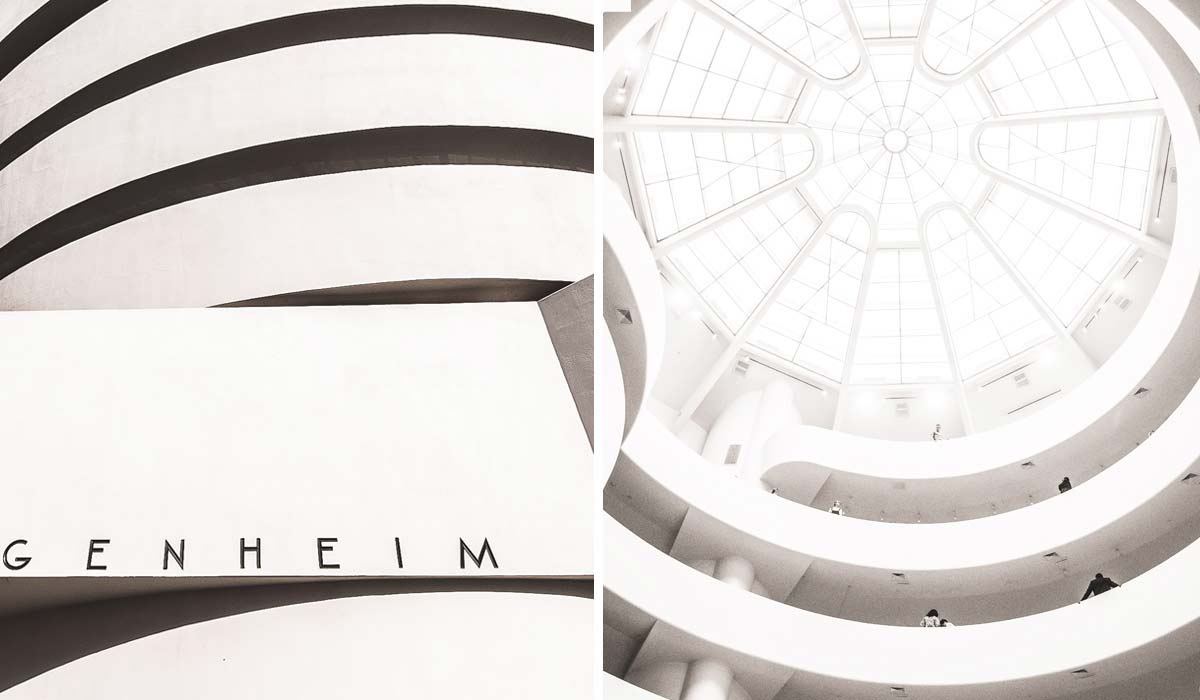 The Solomon R. Guggenheim Museum, often just referred to as The Guggenheim, is an art museum located in the Upper East Side neighbourhood of Manhattan, New York City. The museum was designed by famed architect Frank Lloyd Wright and opened in October 1959 after 16 years of delays and numerous design changes. The museum exhibits modern and contemporary paintings and sculptures and has one of the finest art collections of the country with works including Kandinsky, Picasso, Monet and Van Gogh. Over the years The Guggenheim has become one of the most famous buildings and an architectural landmark for New York City. 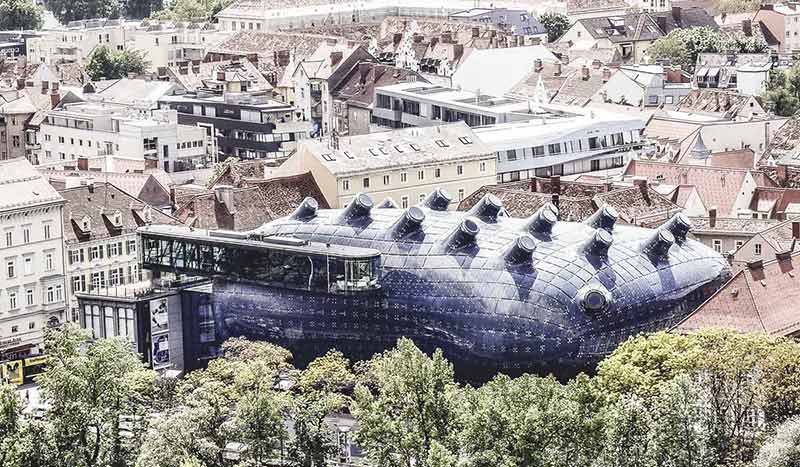 The Kunsthaus Graz or Graz Art Museum was built as part of the European Capital of Culture celebrations in 2003 and has since become an architectural landmark of the city. The blue bubble of art was designed by the two famous architects Colin Fournier and Peter Cook who affectionately gave the gigantic building the nickname “Friendly Alien”. The structure stands out consciously against the surrounding buildings and seems to be floating effortlessly between the roofs of the historic city centre. The unusual building consists of 1,066 acrylic glass elements that form the skin of the structure and houses Austrian as well as international contemporary art. 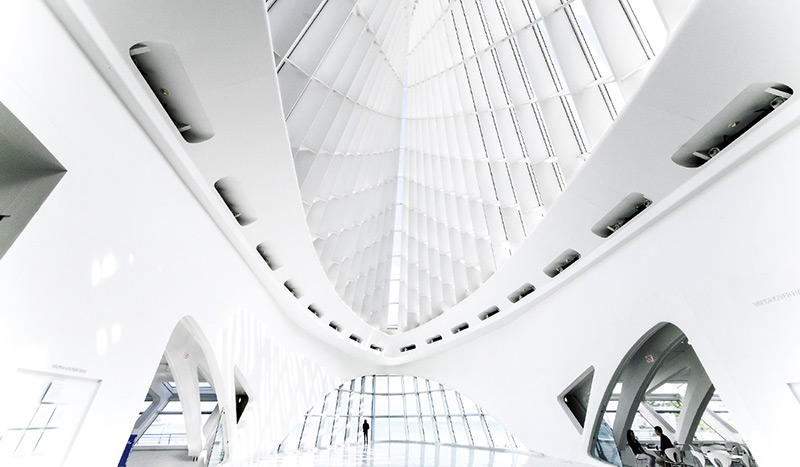 The Milwaukee Art Museum (MAM) is an art museum in Milwaukee, Wisconsin and home to nearly 30,000 works of Art making it one of the largest museums in the United States. The 341,000-square-foot museum includes the War Memorial Center (1957) created by Finnish-American architect Eero Saarinen, the Kahler Building (1975) by David Kahler, the Quadracci Pavilion (2001) designed by Spanish architect Santiago Calatrava as well as a renovation and expansion project in 2015 by Milwaukee architect James Shields. However, the centrepiece of the museum is undoubtedly the Pavilion that looks like the prow of a ship jutting out onto the lake. The Pavilion contains a movable, wing-like soleil that has a wingspan of 216 feet (66m) when open. In 2004 this ultra-modern building received the Outstanding Structure Award and has become a symbol for the city.

THE CITY OF ARTS AND SCIENCES 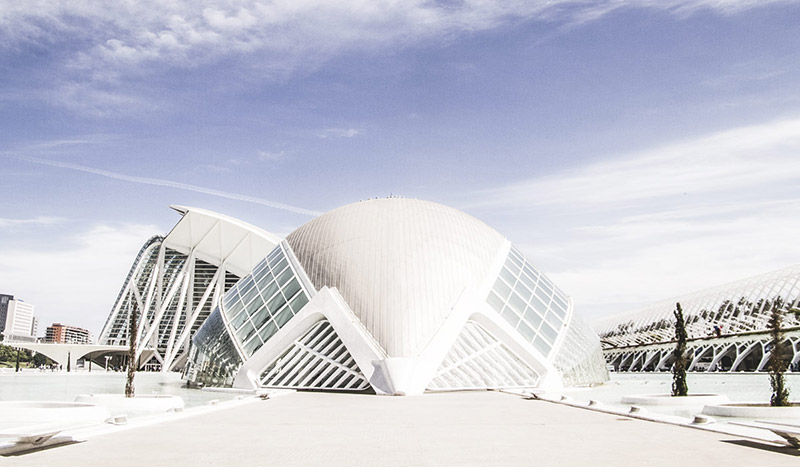 The City of Arts and Sciences (Ciudad de las Artes y las Ciencias) is situated in the dry river bed of the now diverted River Turia in Valencia, Spain and is an ensemble of six areas. The futuristic educational and entertainment-based complex was designed by famous Spanish architect Santiago Calatrava and is an impressive example of modern architecture and a highlight of the city. The City of Arts and Science covers an area of 350,000 square meters and is made up of the following buildings: El Palau de les Arts Reina Sofía — Opera house and performing arts centre; L'Hemisfèric — Imax Cinema, Planetarium and Laserium; L'Umbracle — Walkway/Garden; El Museu de les Ciències Príncipe Felipe — Science museum; Oceanografic — Open-air aquarium or oceanographic park; Ágora — A versatile space that can hold a variety of events. The first building was inaugurated in 1998. The construction of the last project the Torres de València is currently on hold.