A braided belt is a more relaxed alternative to the classic belt, making it the ideal choice for a smart casual wardrobe. Our braided suede belts are crafted in Italy of Leather Working Group Gold-certified leathers from Italy. Our hand-braided belts are meticulously woven of gorgeous vegetable-tanned full-grain leather from France. All of our braided belts are finished with sleek Italian solid brass buckles. We are so confident in the quality of our woven belts that we offer a 2-year warranty.

See where our braided belts are made 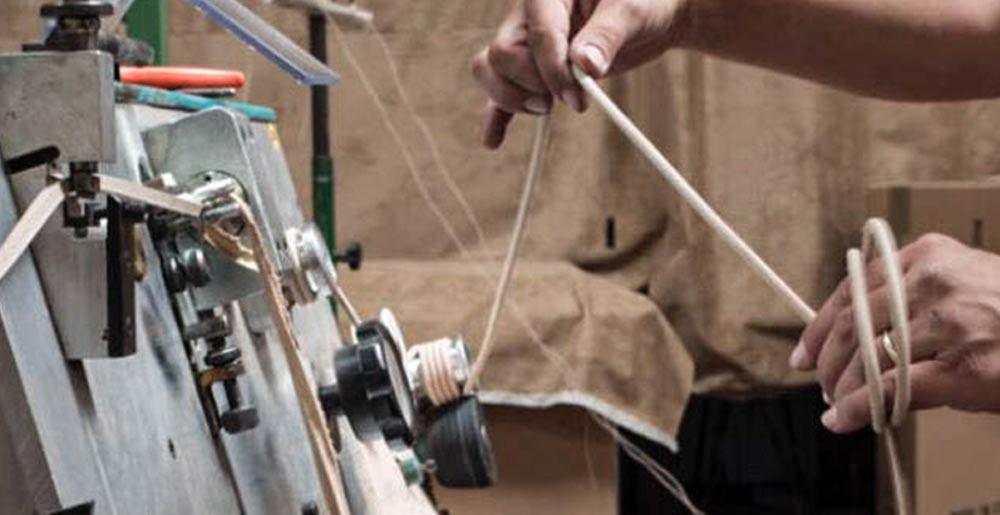 Everything you need to know about braided belts

The history of the braided belt

The history of leather binding can be traced to circa 813 / 814 B.C. to the Carthaginians in modern Tunisia. According to ancient legend, the city of Carthage was founded by Dido, also known as Elissa, after fleeing from an attempt on her life in her home city of Tyre by her brother Pygmalion, the King of Tyre. After fleeing Dido wandered the Mediterranean for many years before finally arriving in North Africa where she negotiated for permission with a local king named Iarbas to settle on his land. Saying she “only wanted as much land as an oxhide could cover”, Iarbas agreed. Dido then ordered for the oxhide to by sliced into long thing strings which were then used to encircle a hill near the coast. The main hill of the city of Carthage became known as the Byrsa, which is a Greek word for oxhide.

The most important of the historical notices on leather from a modern point of view, however, has to do with the ancient Phoenicians who invaded North Africa probably in or around the year 1600 B.C. and transmitted their leathercraft to the Moors. The Moors in turn crossed the Straits of Gibraltar at the beginning of the 8th Century and invaded Spain establishing a brilliant civilization. In Cordova, once the largest city in the world, the leather industry gave origin to several trades, one of which was harness-making.

From the 9th to the 18th centuries Europe had been reconquered from the Arabs but they left behind them not only their leather art, which included elaborate braiding and thong work, but their techniques for executing these things. The Spanish craft of leather braiding and decoration spread, too. The Argentine gaucho makes the same type of woven knot as does the native Indian of Mexico. The entire course of Spanish civilization could well be traced through leather braiding as well as decorative knots.

The first machine-braided leather belts were created in Italy in the early 1980s followed by woven belts of different elastic materials. Before then braided belts were made entirely by hand.

Leather braiding is an almost forgotten and highly neglected art. There are only a few old-time braiders left most of which guard their secret well and like those who have gone before them, these secrets will be passed on to a very few, if any, and in many cases will die with the craftsmen.

Types and techniques of braided belts

A hand-braided belt and a belt that was machine-braided can easily be distinguished by looking at the ends of the belt. Whereas machine-braided belts are topstitched on both ends, the braiding of a hand-woven belt begins at the tip of the belt and is only stitched into the trim of the buckle. Besides the different types of braided belts there also a large variety of different braiding styles and techniques. The main braiding styles are flat (e.g., Five-Thong Braids, Conquistador Braid and Slit Braids), round (e.g., Round Braid of Four Thongs, Turk’s Head, and Herringbone Braid), and square braids (e.g., Square Braid and Twisted Braid). Whereas hand-braided belts are mainly made from leather machine-braided belts come in a variety of different materials such as leather, viscose, cotton, wool and canvas.

What’s the appeal of a woven leather belt?

Even though the aesthetic reasons alone would be quite enough to justify the existence of braided belts there are two main benefits that woven belts offer compared to their classic counterparts. First, there is the matter of sizing and flexibility. The classic leather belt that has existed for centuries always comes with predetermined holes, which might never be really adjusted to fit when weight fluctuates as you might run out of wholes. Braided belts remove this design limitation, as you can simply pop the prong in between the leather stripes to always find the perfect length. Second, there is a matter of elasticity. Even with braided leather belts where the elastic quality is minimal, some stretching occurs when moving around or sitting down. This benefit is even greater when the belt is made of elastic material such as our viscose belts or wool belts where the belt can be stretched up to 20cms.

How to style your braided belt

Braided belts are a fashionable alternative to traditional leather belts and are definitely back in vogue. Whether you're meeting with friends in your free time or having a meeting with business partners, braided leather belts can be worn with a classic business suit as well as casual jeans and a t-shirt. As a summer belt, they combine particularly well with casual light clothing. But also in the cold season, their natural or artistic look brings a special nuance to your own style. With each of our men's braided belts, you're letting the world know that you also choose your accessories with savvy and taste. A woven belt is a fashionable accessory that matches well with other parts of your outfit, such as shoes. We offer the perfectly matching sneakers for many of our braided belts. A modern braided belt therefore does so much more than keep your trousers in place — the belt has undeniably become a key accessory in your wardrobe.

Our braided belts come in a variety of widths so that they fit perfectly into different belt loops. We also offer numerous colours, ranging from classic black to subtle shades of brown, blue, and grey as well as some bolder colours. All of our hand-braided leather belts are crafted in Italy. To find out more about the manufactory click here. We use only the very best vegetable tanned full-grain calf leather from France for our hand-braided belts. All other braided belts are also crafted in Italy. We have a large collection of braided suede leather belts with many colours to choose from. Moreover, we offer viscose belts and wool belts. All our belts come with solid brass buckles made in Italy. Braided belts are a fashionable alternative to a traditional belt made of leather. Shop our braided belt collection here.