Cities are the place to be these days. According to a United Nations report, an estimated 54.5 per cent of the world’s population lived in urban areas in 2016. The UN projects that the urban population will reach 60 per cent by 2030, with one in three people living in cities with at least half a million inhabitants. For nature lovers, who see cities as debilitating, stifling places, those statistics can be rather frightening. With cities getting busier every day and more and more open spaces being turned into office buildings and apartments, landscapers are being forced to get creative when developing green oases.

On our nature walk below, we have selected some of our favourite green spaces from around the world that are absolutely unique and offer a little relief from our concrete urban landscapes. From disused tram tracks turned green to soil-free vertical gardens on high-rise apartment blocks, these green spaces are trailblazers for new green developments in our cities. 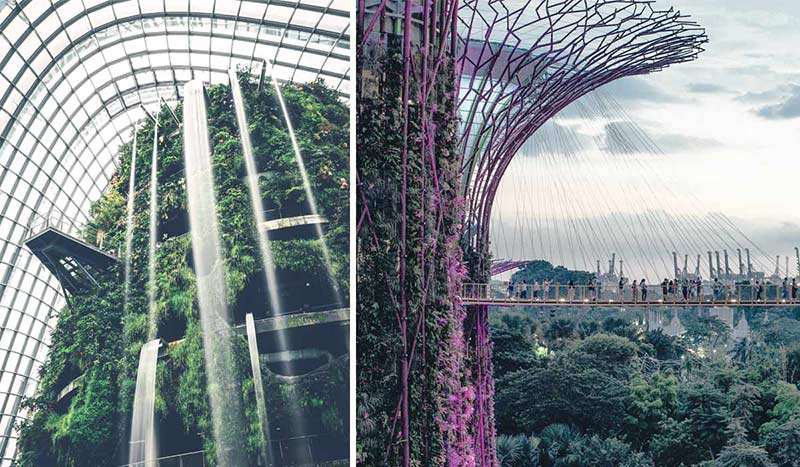 We’ve all heard of a “Garden City”, but what about a “City in a Garden”? That’s precisely what the Singaporean government is trying to achieve. The stated aim is to raise the quality of life by enhancing greenery and flora in the city. With the opening of Gardens by the Bay in 2012, Singapore definitely is on a good way. The nature park spans over 101 hectares (250 acres) of reclaimed land in central Singapore, adjacent to the Marina Reservoir and consists of three waterfront gardens: Bay South Garden, Bay East Garden and, Bay Central Garden. The horticultural theme park’s premier attraction, however, is the Cloud Forest. This staggering greenhouse-like glass dome can bee seen from all over the city and is just as stunning inside as it is from the outside. Encased within is a 35-meter-tall tower of exotic vegetation, that attracts visitors with its jaw-dropping architecture, spiralling walkways, and the world’s tallest indoor waterfall. Surrounding the dome, you can find a grove of Supertrees – 50-meter-high fairyland-looking towers, that are connected via suspension bridges for treetop views of the gardens. 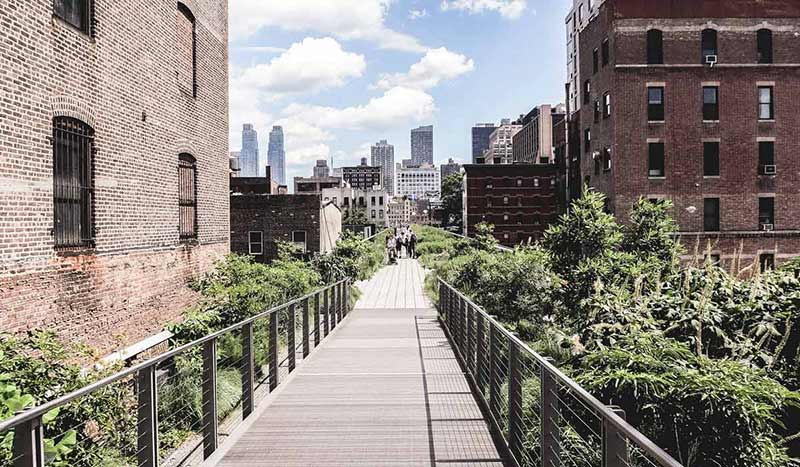 Commuting up the West Side of Manhattan has never been easier and greener – it’s literally a stroll in the park thanks to the High Line. New York City’s only elevated park is one of the city’s most popular attractions, and it’s not difficult to see why. The High Line is a public park built on a historic freight rail line that went out of use in 1980 and runs from Gansevoort Street in the Meatpacking District to West 34th Street, between 10th and 12th Avenues. The 1.45-mile-long aerial greenway was resurrected in 2009 and turned into a green oasis paying homage to the wild flora that colonized the line after it was abandoned. Visitors can find wildflowers, greenery and outdoor art, while granting walkers with some of the best views of NYC’s skyscrapers and the Hudson River. 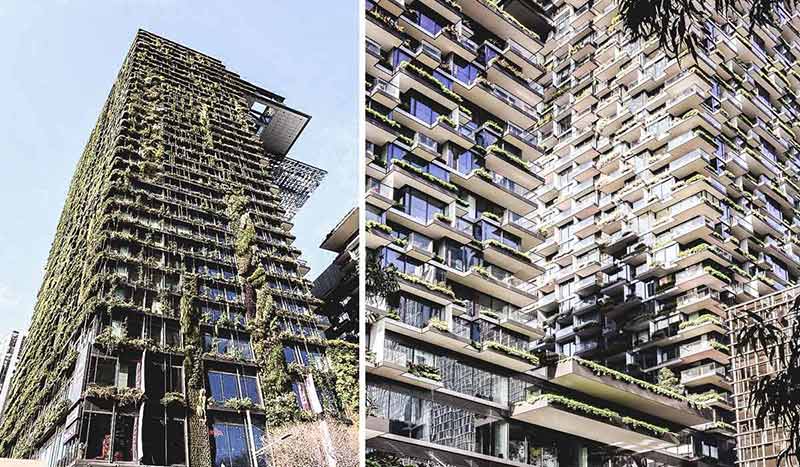 Named the best tall building in the world and admired for its innovative green design, the residential building One Central Park in Sydney is urban architecture at its best. The buildings features include hanging gardens, a cantilevered heliostat, an internal water recycling plant, and a low-carbon tri-generation power plant. The hanging gardens which are definitely the key feature of the building were designed by French botanist Mr. Patrick Blanc who covered the surface of the building with 35,200 plants across 383 different species, including some natives such as acacias, which colour each residential unit in a bright yellow. The flowers and vines which stretch over 50 meters high, have turned One Central Park into the world’s tallest vertical garden and into a benchmark for green architecture. 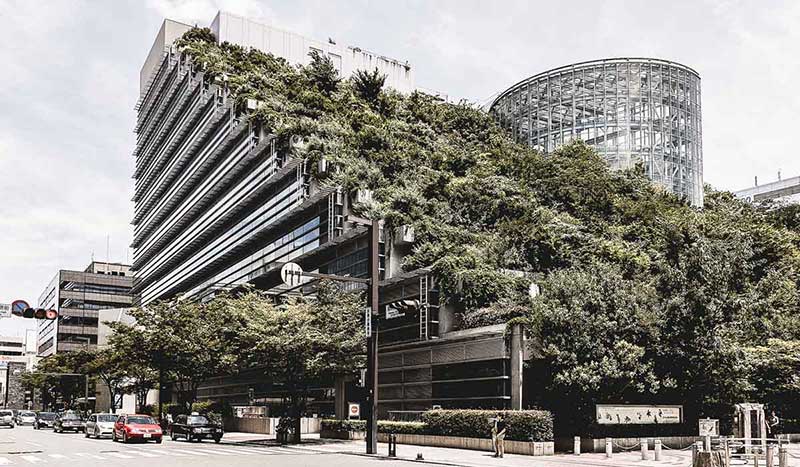 The ACROS Fukuoka building in Fukuoka City, Japan is a remarkable building with two very distinct sides. Whereas the front of the building looks like your ordinary office building the back rather seems like an overgrown Inca pyramid. The building appears to seamlessly extend the last park Fukuoka’s city centre has to offer onto the building’s entire south façade through a series of terraced gardens for a continues green surface. Each level reveals natural wonders from ponds to waterfalls. The 14-story ACROS building was designed by Argentine architect Emilio Ambasz who created a design that would preserve the last green space of the city as much as possible. The garden terraces, which reach up to about 60 meters above the ground, contain some 35,000 plants representing 76 species. 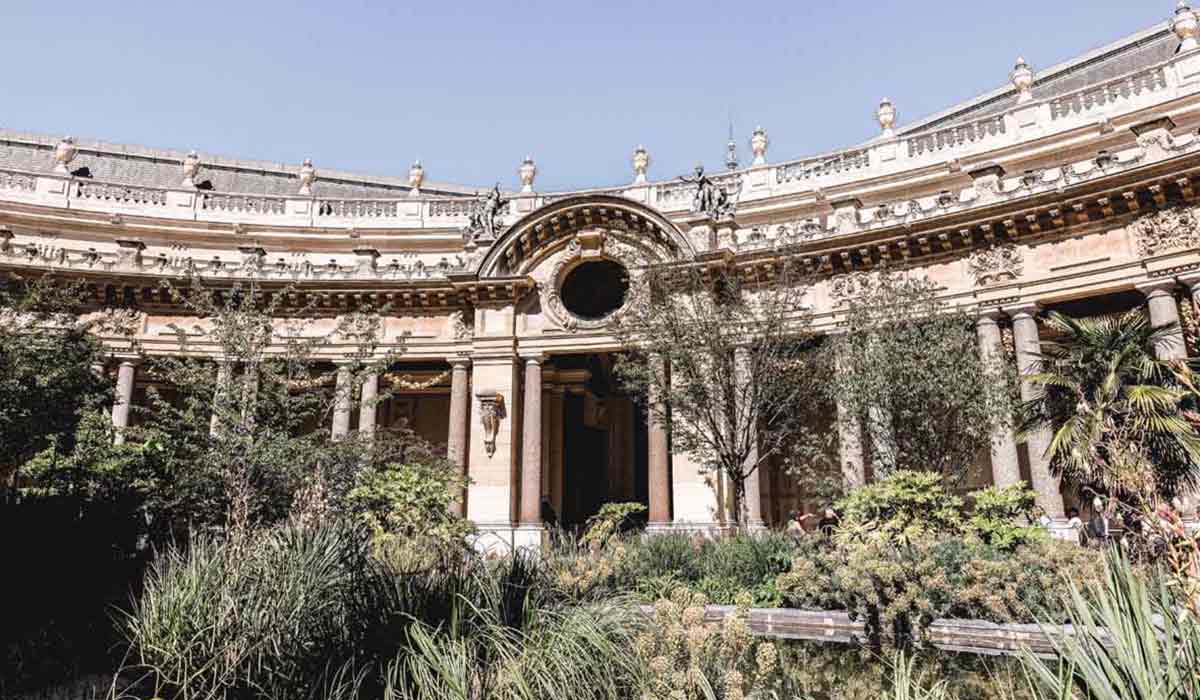 The Petit Palais, which was built in the Beaux-Arts style is an architectural gem that dates back to 1900 and is situated on the avenue des Champs-Elysées in Paris. The building, which like the tourist-weary Grand Palais that lies opposite it, was built for the Universal Exposition and houses the Musée des Beaux-Arts de la Ville de Paris. The trapezoid shape of the Petite Palace forms an open area at the centre of the building, which creates a semi-circular peristyle courtyard. The elegant courtyard with its three ponds and the mosaic covered floors invites for a stroll and adds to the charm of the establishment. The little cafe situated in the peristyle garden is a good place to rest and enjoy a nice cup of coffee. 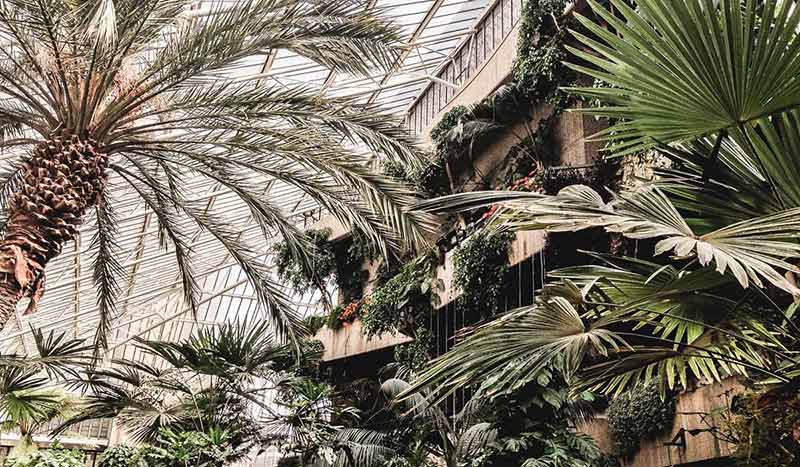 Situated inside one of Britain’s most prominent examples of brutalist architecture, the Barbican Room and Conservatory in London is one of London's hidden gems and a tropical oasis in the heart of the city. The glasshouse is the second biggest after the one at Kew Gardens and is home to a variety of exotic fish and over 2,000 species of tropical plants and trees from all around the world. There is also an arid house, which contains a spectacular collection of cacti that was donated by the British Cactus and Succulent Society. With sheltered walkways and a number of private hideouts, the Barbican Garden Room is a peaceful place and a little secret retreat. 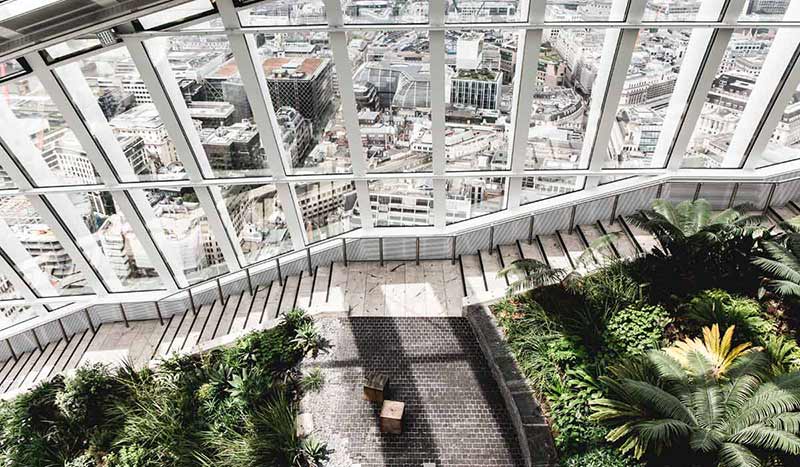 The Sky Garden at 20 Frenchurch Street - London. Photograph courtesy of Obey Your Eyes

Another unique green space in the city of London is The Sky Garden at 20 Fenchurch Street, which is the highest public garden in the City. The garden spans over the top three storeys of the 160m (525ft) tall building and offers not only 360 degree uninterrupted views across this city but probably also the best panorama due to its central position within the captial. However, the sky garden has been subject to criticism ever since its opening, as it has failed to meet pre-construction expectations of the extent and quality of the garden. The City of London Corporation’s former chief planner, Peter Rees, who approved the structure with the sky garden being the key factor for the approval of the building, said: “I think calling it a sky garden is perhaps misleading. If people are expecting to visit it as an alternative to Kew, then they will be disappointed.” Although the “garden” doesn’t feature the full-height trees that were promised The Sky Garden is still a great concept that can be improved by architects and landscapers in the future.